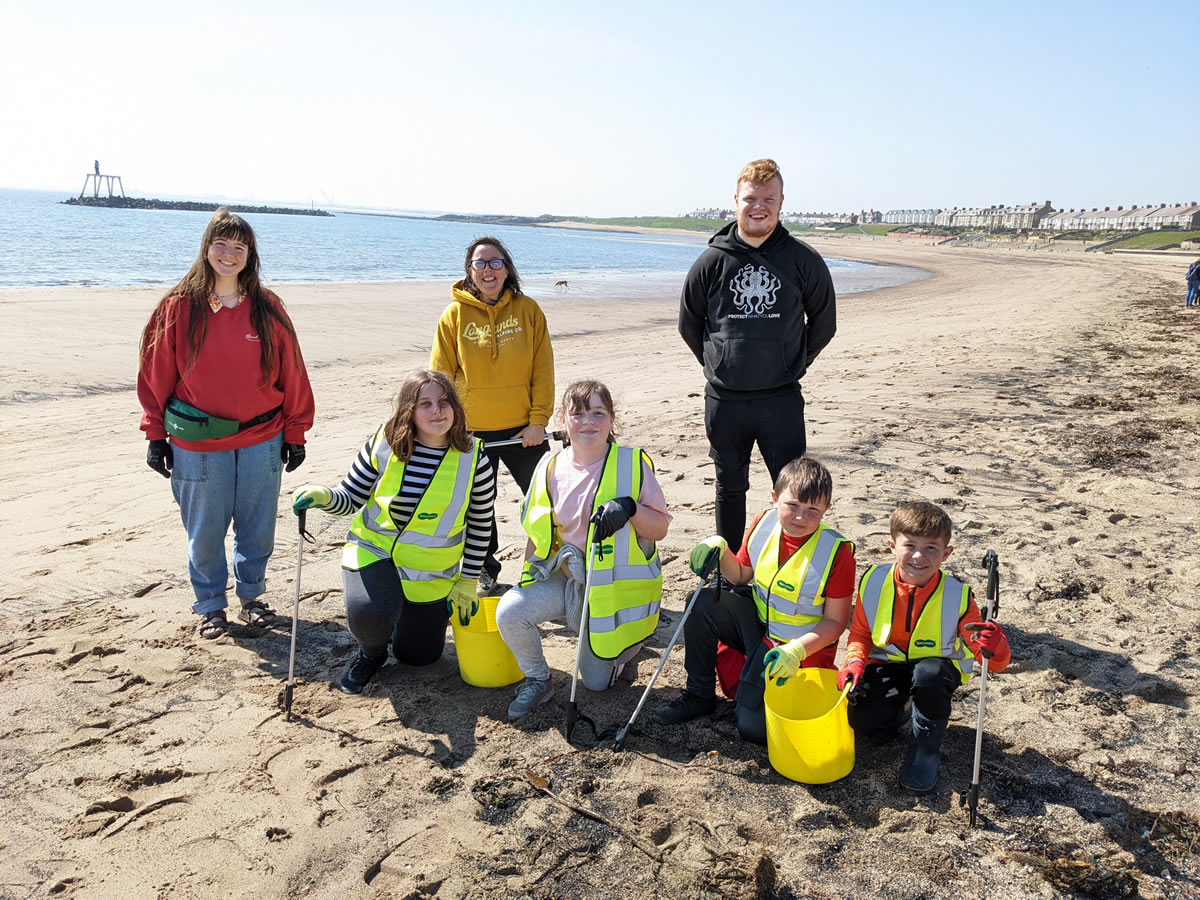 A primary school in Ashington has partnered with conservation experts from a local diving centre to help clean up one of South East Northumberland’s most popular beaches in the aftermath of the school holidays.

Pupils from Bishop’s Primary School, which operates as part of Northumberland Church of England Academy Trust (NCEAT), teamed up with Blyth-based, The Fifth Point Diving Centre, to carry out the two half-day beach cleans.

As part of the experience, pupils also enjoyed a series of workshops where they learned more about how litter that finds its way into our oceans from our beaches can harm marine animals and people can do to help stop it.

The project forms part of a Trust-wide initiative to help NCEAT to reduce its carbon footprint.

Inspired by last year’s United Nations Climate Change Conference, the Trust’s CEO, Alan Hardie, set pupils a challenge in the form of a competition to come up with an idea for an ‘eco project’ which their school could complete independently to supplement the work already being done by the Trust to operate more sustainably and contribute towards its overarching corporate social responsibility goals.

The beach cleaning project for Bishop’s Primary School was the winning idea suggested by Year 5 pupil, Khloe Hunstone, who received a special award from the CEO for her conscientious approach to a topical issue impacting our local area.

“We are very proud of the work our children and staff do in school to address environmental issues and the part they can play in reducing our carbon footprint.

“The children responded with great enthusiasm to the challenge set by Mr. Hardie and we had a wide range of ideas. The beach is close by and used by our community, so this was a fitting winner. It is also something we can continue to do regularly to sustain our efforts. Well done Khloe and the Year 5 beach cleaners!”

Over the course of the two days, 12 large bags of litter as well as two broken lobster pots, some fencing and some concrete blocks were collected and removed from the beach by pupils with support from teaching staff and the team from The Fifth Point.

“Young people are increasingly concerned with issues like climate change and the state of the oceans. The Year 5 pupils at Bishop’s Primary already knew so much about the impact of litter on animals. They had lots of stories to share about the things they do at home to try and reduce the amount of single use plastic they use and many were already regular beach cleaners.

“We were so happy to be able to help them learn more but most importantly take action and do something that is directly helping their local ocean and all the marine life that live there.”

Other projects currently underway by schools within the multi-academy trust as part of NCEAT’s green initiative include the expansion and redevelopment of the vegetable garden at NCEA Warkworth C of E Primary School to supplement the school kitchen, the creation of a wild flower garden and wildlife habitat on the grounds of Duke’s Secondary School, also in Ashington, and exploration into renewable energy sources as a means of powering part of the campus at William Leech C of E Primary School in Lynemouth.

“We were blown away by some of the competition entries we received. The level of thought that the children had put into their ideas and their consideration of both the long and short term benefits of their proposed projects was really impressive.

“We’re delighted with the diversity of the winning projects as a collective and can’t thank the businesses who have come on board to support our schools with their implementation enough for their time and expertise. We hope that the children will learn a great deal about the importance of protecting our natural world through their experiences.”