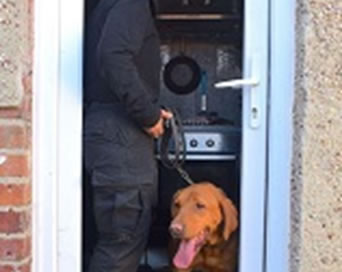 In the past 12 months Northumbria Police have recovered a huge quantity of drugs including heroin, cocaine, amphetamines, prescription drugs and cannabis in Ashington.

Operation Momentum is a drug busting initiative, in the town, that targets serious and organised crime linked to drugs. The initiative, to date, has resulted in 526 arrests, 148 vehicle seizures, 27 warrants, 5 evictions and the shutting down of 2 properties.

Northumbria Police highlight that Ashington is a town with an enormous sense of community spirit and stress that it is a minority of people involved in drug misuse and associated crime. The overwhelming majority of people love their community and want to see it thrive and have supported the Police in their efforts.

Inspector Chrissie Skillen, from the Ashington Neighbourhood Policing Team, said  ‘I am delighted with the results we have seen through this operation, and thanks to community intelligence and support, we’ve put a real dent in the pockets of organised criminals. Community engagement has proved vital in helping to protect some of the area’s most vulnerable. Officers have been working closely with our partners to identify children and adults at risk of drug abuse or exploitation and remove them from harmful situations. This initiative is not just about targeting drug dealers, its aim is much deeper, to disrupt organised crime and protect the community of Ashington.’

Kim McGuinness, Northumbria Police and Crime Commissioner, adds ‘This is one of those operations that is going from strength to strength; we've seen a significant amount of drugs taken off the street in the last year – really fantastic police work. We all want to rid Ashington of drugs and associated crime and I know Northumbria Police certainly won't be slowing down their fight to tackle these problems. Remember, all this kind of activity is linked to increased anti-social behaviour and violence in our communities and it's unacceptable. This work will not stop. So, if you know anything, get in touch with your Ashington Neighbourhood policing team and report it – you might just have that bit of information that is key.’

In an emergency always dial 999.