The start of a new Council year for Ashington Town Council 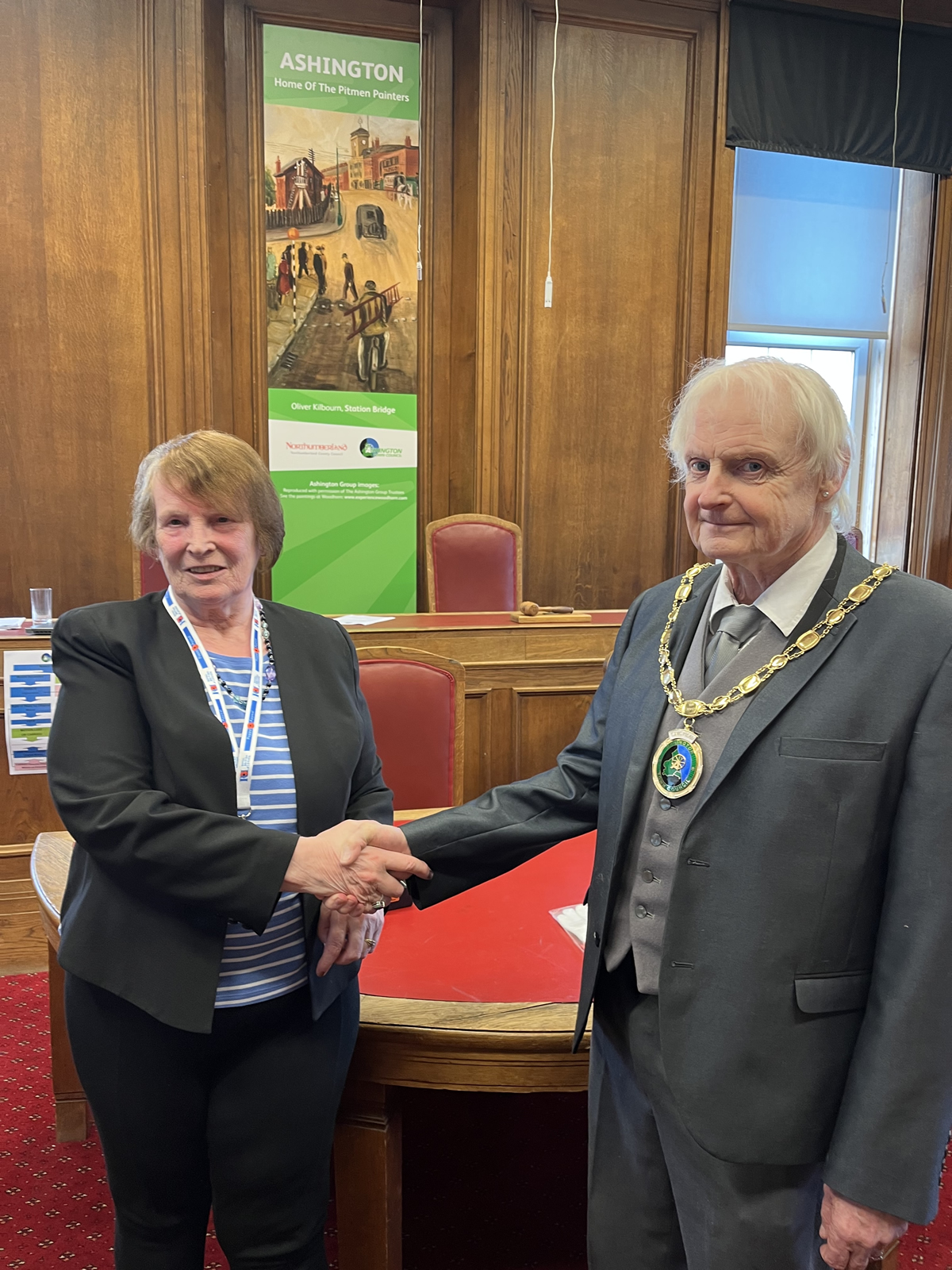 The annual meeting of a council is often a strictly formal affair, but one that sets the tone for the coming year.

Cllr Purvis said he was extremely proud to be once again in the trusted position of Chair of the Council, and he looked forward to the year ahead.

The roles of Civic Head and Deputy Civic-Head were also elected, and council regalia was ceremonially handed across to those Councillors who will represent the Council in the year ahead. The Civic Head will attend functions and events in the community, such as openings and fundraisers that are organised by the voluntary and community sector, as well as other events, when invited. The Deputy-Civic Head is on hand to attend events in support of the Civic Head and when the Civic Head is not available.

Cllr Pauline Thompson handed over the honour to Cllr Bob Walkinshaw, the new Civic Head for 2022, and offered the report featured below of the outgoing year. 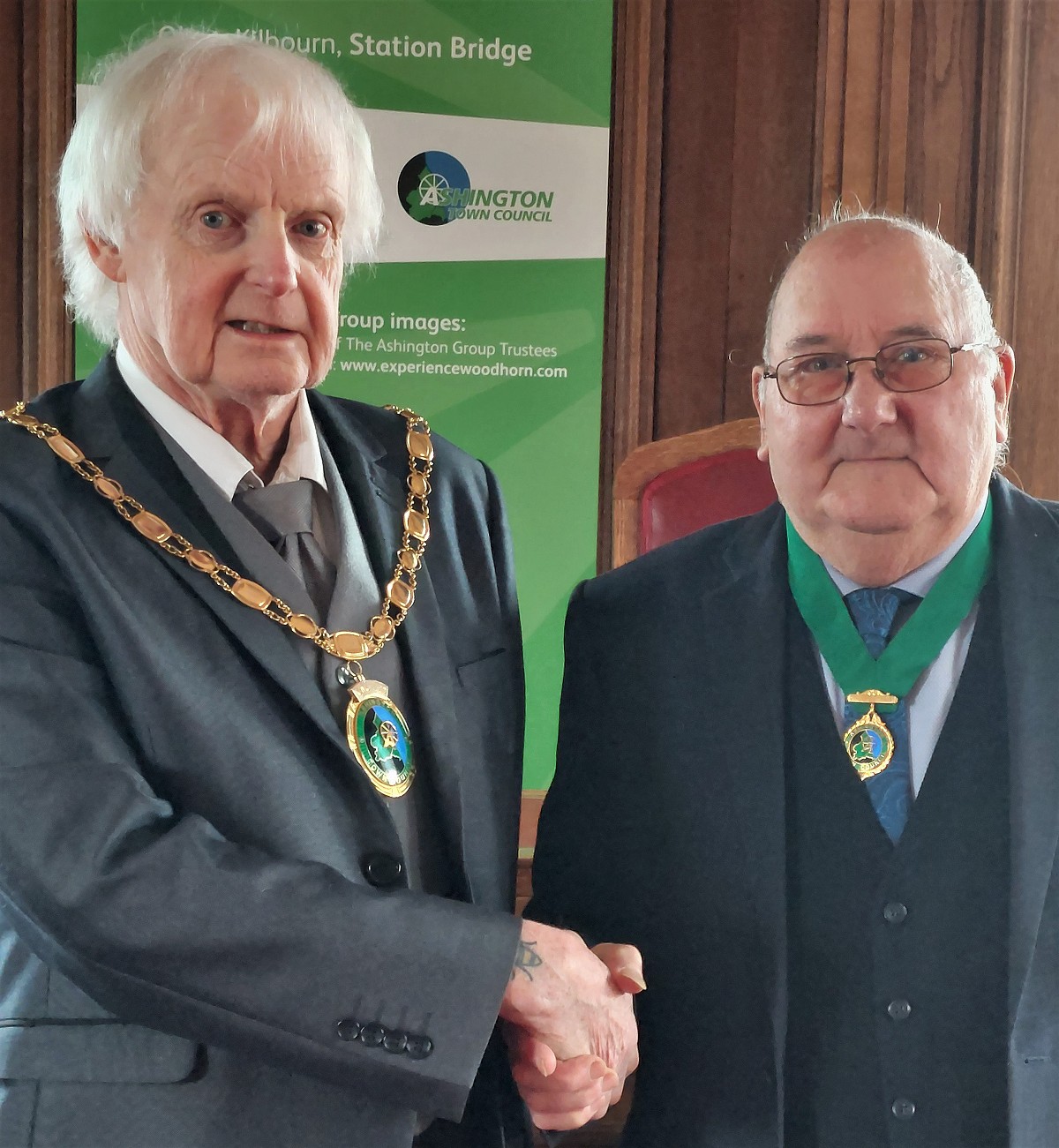 “It has been an absolute pleasure being Ashington Town Council’s Civic Head for the past year, albeit during lockdown and through the start of the Covid vaccination programme. Although many people were isolating during this time it was a case of, carry on as best we can under the circumstances.

Ashington was unable to hold the Miners Picnic last year, but we were able to commemorate the Event at the Miners Wheel. Armed Forces Day was recognised in the Memorial Garden when a small group supported Ian Lavery MP, Father Chris Groocock, Ashington Royal British Legion, and myself on behalf of Ashington Town Council, to make sure this important day was marked and recognised.

As the year moved on the Town Council was able to hold the Garden Competition, and I enjoyed getting out meeting people again, and especially enjoyed visiting the amazing garden of Central Primary School.

Throughout the year, visits to various activities and groups, as well as exhibitions, has proven just how resilient people are. As we all look to the future, I was reminded of the changes ahead, most specifically for Ashington; I took a journey on the rail line from Newcastle to Ashington, passing through the six new stations under construction.

It was a great pleasure to finish my year as Civic Head with an invite to Robert and Margaret Auld’s 70th Wedding Anniversary, particularly poignant in the same year as Her Majesty the Queen celebrates her own Platinum Jubilee.

I am so pleased to be handing over to my successor and know that the Ashington Community will make him very welcome, as it did me, throughout a very difficult year.”

“The people of Ashington are very outgoing and they like to get involved in the community. We know that events are back, and that people appreciate them now more than ever. I am really looking forward to the opportunities to represent the Council, the first being the Annual Celebration Concert of the Ashington and District Male Voice Choir."

Ashington Town Council re-elected Cllr Matthew Cuthbert as the Leader and Cllr Lawrence Henderson was elected Deputy Leader. The Leader works directly with the Town Clerk, Chair of the Council and Committee Chairs to develop and propose the strategic direction and policy goals of the Council.

Cllr Matthew Cuthbert thanked the Council for their support over the previous year and their ongoing support moving forward.

The Council went on to agree their standing orders, financial regulations and several policies and procedures, all of which are available on the Town Council website.

The priority of the Climate Change and Environment Committee was elevated to that of a standing committee of the Council, with all Councillors decreed members of the committee. It is expected that the committee will have fully delegated powers to make decisions, with terms of reference scheduled for approval at the full council meeting in July.

Requests for the Ashington Town Council Civic Head to attend events should be made via the town council office, using the contact details below.